Drake and Josh Wiki
Register
Don't have an account?
Sign In
Advertisement
in: Episodes, Unaired Episodes, Characters, Season One

The Unaired Pilot is a 2002 pilot of Drake & Josh that never aired on Nickelodeon. The series later premiered in 2004.

This pilot followed the same plot as the official first episode which was known as "Pilot." It featured the same cast, but had actor Stephen Furst portraying Walter Nichols instead of Jonathan Goldstein. The living room set was also changed in the series. Drake had a different hairstyle instead of spiky hair in Season 1, and Josh's Ms. Nancy costume is very different. Clips from the original pilot were finally uploaded in 2017.

Differences Between The Unaired Pilot and The Aired Pilot

Some differences may contain spoilers and may be explainable to the viewers. 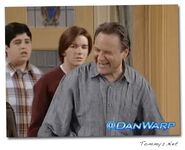 The living room in the pilot