Jerry Trainor was born and raised in San Diego, California, the son of Bill Trainor and Madelyn Trainor. Trainor has an older sister named Liz Trainor. He is of Irish descent. Far from the glamor of Hollywood, Trainor lived in the same childhood home until venturing to college. His father was a Navy commander of a fighter squadron and his mother was a calculus teacher at USD High School, the same high school Trainor attended. He credits both of his parents for his comedic bent and his ability to balance it with a serious side. The love of laughter and the spotlight hit in elementary school, where a “Hansel and Gretel” spoof inspired him to explore the silly side of life. Growing up, the Trainor excelled in math and considered becoming an architect but he opted to build a career in comedy instead. He got more serious about comedy at University of San Diego High School, and roles in the Pajama Game, The Matchmaker, Guys and Dolls, Up the Down Staircase, and Sugar followed. Trainor attended UC Santa Barbara for the quintessential college experience, combining academics and partying on the beach. He graduated from UCSB with a BFA in acting – but not before a Hollywood agent caught his one-man comedy show at college and urged him to audition in Los Angeles.

His first role was on television in the risque MTV series, Undressed. Some of his other television credits include, Drake & Josh, Angel, Malcolm in the Middle, Boston Public, Crossing Jordan, and a small scene in Victorious. His first recurring TV role was as Brian "The A.V. guy" on Crossing Jordan. In his appearance on Drake & Josh, he was known for his role as Crazy Steve. All the while, he kept his day jobs at Starbucks, the Geffen Theater box office and Center Theater Group phone room. Jerry’s recurring role as Crazy Steve led to his first regular series gig when he was cast as Spencer, an off-centered aspiring artist and brother and guardian of his teenaged sister, Carly, on Nickelodeon’s mega-hit television series, iCarly. Trainor’s portrayal of Spencer garnered the actor his first Teen Choice nomination for Choice TV Actor: Comedy in 2009 and a nomination for Big Kid Award at the 2010 Australia Kids’ Choice Awards, which Trainor also co-hosted. He also has had a number of small roles in films such as the science fiction-horror film, Donnie Da'rko, Evolution, and the cheerleader comedy Bring It On Again. Jerry also played the mad Doctor/Various other characters in the Henson Alternative web series S.U.D.S, which was supposed to be released in 2009 on Film.com. We have only seen a trailer  and some pics taken from Jerry's Facebook page. His voice-over roles include: The Penguins of Madagascar (cockroach) and the lead character, Dudley Puppy, from Tuff Puppy. Outside of film and television, Jerry was in a "World of Warcraft" video series called Project Lore. He played the healer Goggins who is a Draenei shaman. He left the show on February 7, 2009. He hosted the 2010 Australian Kids Choice Awards along with Miranda Cosgrove. He was mentioned in the 2011 Australian Kids Choice Awards, when Jennette said that Jerry gave Nathan and her advice for the awards. Jerry had a main role with his iCarly co-star Jennette McCurdy in the 2011 movie, Best Player. He had a main role in the 2007 movie, Merry Christmas, Drake & Josh. Unlike all other Drake & Josh episodes he got credited in the beginning. As of 2012, it was confirmed that Jerry would be filming a pilot for Nick@nite. A new comedy show called "Wendell & Vinnie" a multi-camera project that was created by Emmy-winning writer-producer Jay Kogen (Frasier). In 2013, Jerry was part of "Wendell & Vinnie" and he is set to be a producer on his own show. 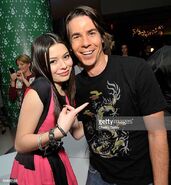